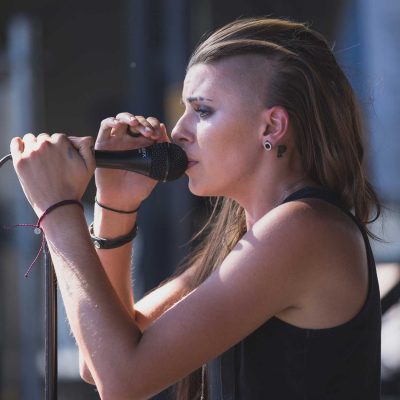 OM6  – lead and backing vocals
D6  – kick drum
PVRIS (pron. “Paris”) is an American rock band from Lowell, Massachusetts formed by Lyndsey Gunnulfsen (vocals), Alex Babinski (guitar), and Brian MacDonald (bass). They released their self-title EP in 2013, an acoustic EP in February 2014, and most recently their highly anticipated full-length debut, White Noise, in November 2014 from Rise/Velocity Records. PVRIS signed with Rise in June 2015, making them the first female-fronted band to sign with the label. They have already toured in support of major acts such as Pierce the Veil and Sleeping with Sirens and won the Relentless Kerrang! Awards 2015 for Best International Newcomer.

FOH engineer Connor Hawkins told us how Lyndsey’s new Audix OM6 has changed their live performances. “During our line check I could tell even through headphones that a lot of the EQ I would typically do on a daily basis wasn’t going to be necessary. As soon as the vocals came in during the set I could instantly hear a difference in the coloration and clarity of Lyndsey’s vocal on her OM6. Her comments were that she could hear herself a lot better on stage, which has always been a major struggle. One of my other praises was how much less cymbal bleed I had in the vocal mic it allowed me to use on my overheads as overheads and not have to pull them back because so much is getting caught up by the vocal.
We have standardized the OM6 for all vocal applications.”

“Also I am a huge fan of the D6 after this summer on Warped I had a D6 on kick for all the bands I mixed and I loved how it sounded right off the bat. Towards the end of the tour I got to use an extra D6 on my floor tom which in my opinion sounded huge. I’m looking forward to integrating Audix mics onto the rest of our stage.”