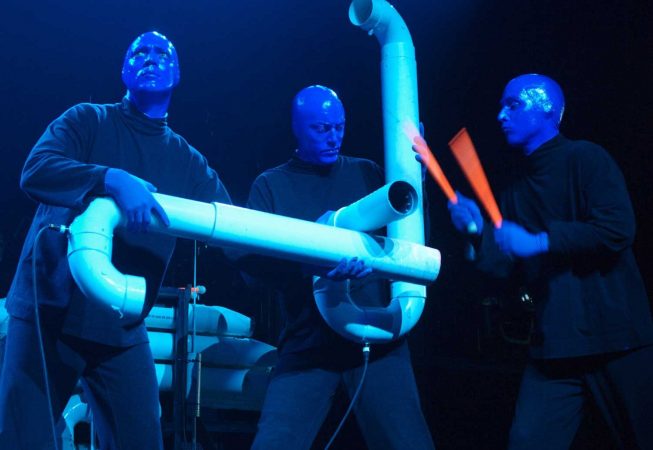 If you haven’t seen a Blue Man Group show or concert, it is literally indescribable. If you have, then you know it’s a gourmet treat for the senses, pushing the limits of technology for light and sound.

Sporting blue grease paint and black outfits, the Grammy-nominated group is known for their all-ages theatrical shows and concerts combining music, satirical comedy and commentary on contemporary culture-all performed with multimedia theatrics and without a single word. And over the years, the group has developed a set of custom instruments, many designed from common materials such as PVC pipes!

Audix has been involved with the audio since the inception, working with their sound designer, Ross Humphrey. Humphrey, has been with BMG since the late ’90s. He designed a micing system utilizing a myriad of Audix mic’s to handle many of BMG’s various amplification needs-whether it’s in fixed installations such as in Vegas, or on the Megastar concert tour-such as vocals, percussion and “backpack” applications for the Blue Men themselves.

“I first heard about Audix mics in the early 90’s when I was touring with the Mighty Mighty Bosstones. We were opening a tour for the Butthole Surfers, and Ratt Sound were using OM7’s on the B.S. vocals. I use a lot of Audix mics. I have to be able to use the appropriate mic for any given application, particularly with Blue Man, so I strive to use the mic I find best suited for any particular application. Since discovering Audix in about ’92 or ’93, I’ve used OM7’s for vocals almost exclusively. I typically work with loud bands and the Audix OM7’s have such good rejection I don’t end up with 2 or 3, or 8 ‘cymbal mics’ scattered around of the stage.”

Aside from an assortment of D4’s and D6’s used for percussion, the group uses the Micros (M1250) inside the unique PVC bodypacks that have become an integral part of the show. They have also incorporated the OM7 for vocals as part of their live touring show.